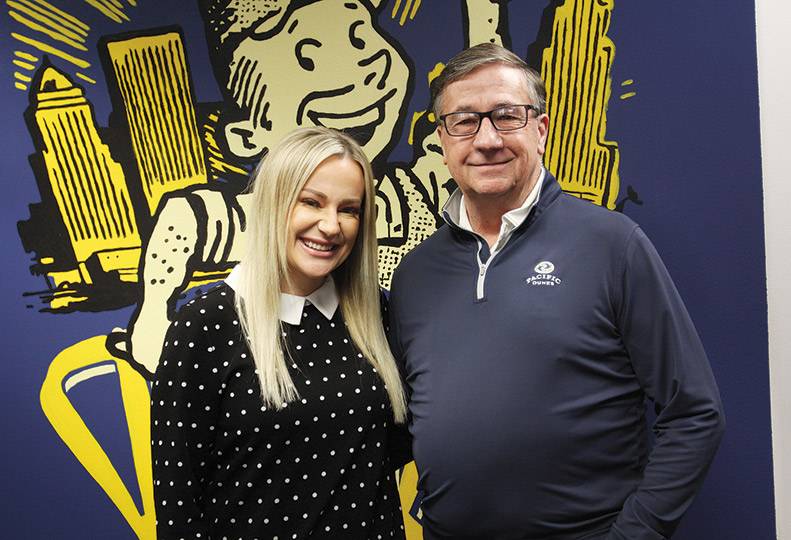 Valliant, Holmquist, and Baker Spink bought shares from Baker’s longtime business partner, Reed Caudle, bringing the total shareholders for the company to four, including Baker. Caudle will no longer be a principal with Baker Construction but will stay on as senior vice president of business development and remain active on the company’s board of directors and executive committee.

The new shareholders have been part of Baker Construction’s executive team for several years now, says Baker Spink, Baker’s daughter who joined the company in 2013.

“He’s been preparing us,” says Baker Spink. “We’ve sat on the executive team for some time now and been part of critical decisions.”

Barry Baker has been involved for 45 years in the family business. At 66, he’s not planning to step down, but says that planning for succession is a key element of success.

“One of the main reasons businesses fail is they don’t have a succession plan. We want to make sure it continues,” Baker says. “It would be a shame if we hired all these wonderful people, and you had to sell the business.”

In addition to participating in family business seminars at Gonzaga University, Baker says he called in the company’s attorney, banker, insurance agent, and bonding agent to make sure that the transition will go smoothly.

Caudle and Baker will also serve as mentors to Valliant, Holmquist, and Baker Spink as the three begin to envision where they would like to take the company.

Valliant and Holmquist have been with the company for over 30 years combined. Baker Spink says she sees them as her big brothers, and, collectively, they call themselves the three amigos.

“My dad used to say to me a few years ago, we can be anything we want to be, so what do we want to be?” says Baker Spink. “That’s truer today than ever, because overnight, we can become a $200 million a year company.”

Baker Spink says that in 2022, the company will complete construction projects valued at $100 million throughout its 12-state region. She adds that the company is in a position to accept only the projects the company wants to do without becoming overextended. Between the office and the field, the company has 65 employees and hires local subcontractors for its projects in and out of state.

“We know this construction boom is not going to last forever. One of the things we want to ensure is that in the next recession and downturn, we’re going to make it through,” says Baker Spink.

Getting through economic recessions and downturns is one of the many things that Baker says he wants to impart through his experience and knowledge to the new leadership team.

Since joining the family business in 1977, Baker has weathered a handful of financial recessions and construction booms. In the early ’80s, the prime rate rose to 21% and Baker Construction had an SBA loan that was floating 2.75% above prime, says Baker.

With the onset of the COVID-19 pandemic, Baker says, the company has had a backlog of work.

“With price hikes, COVID, and supply-chain issues … that’s really put a crimp in things, but this too shall pass,” says Baker.

The other components that have helped Baker Construction stay in business for well over a half-century is its focus on community relationships and staying nimble, says Baker Spink.

“We’re riding the apartment wave right now” she says. “Throughout our history, we have remained nimble and rode whatever wave we were served.”

Throughout its history, the company has morphed, taking advantage of different opportunities as they emerged.

The company’s roots began as a real estate and insurance agency founded in 1951 by Baker’s parents, John and Vera Baker, in the Canadian town of Swift Current, Saskatchewan. In the late ’50s, they moved the family business to Wenatchee, Washington, to take advantage of the agricultural boom by building storage facilities for apples, potatoes, and grain.

In 1972, the Bakers moved their family business to Spokane and became Baker Steel Buildings, buying the rights to a line of prefabricated steel buildings from a family friend.

Baker Spink says her dad and grandparents didn’t know anybody when they first moved to Spokane. However, she contends, her father believed that the key to success was building relationships. Baker joined the Lions Club, the Better Business Bureau, and other organizations in town and began cold-calling potential clients, introducing himself and the company to the Spokane community.

“I want to follow in my dad’s footsteps of being a connector in this community,” says Baker Spink, “He’s got an amazing ability to walk into any room and bring people together.”

Baker Spink says that 76% of the company’s business is repeat business, which underscores the importance of building and maintaining relationships.

Baker Spink says that while working with clients is serious business, she doesn’t take herself too seriously.

“I think a good way to disarm people is to bring humor into the situation,” she says. “You’re literally holding someone’s life savings in your hands, and that’s nothing to be joked about, but we want this process to be fun.”

Some of the projects Baker Spink says the company is most excited about include the new Tesla Service Center, in Liberty Lake, and the $11 million West of Jefferson and Flatiron mixed-use buildings that the company just recently finished in Kendall Yards for Greenstone Corp.

The Tesla project on 21728 E. Mission is located just north of Interstate 90 and east of the Mission Avenue-Harvard Road roundabout. It’s the first Tesla service center in the U.S. to be built from the ground up, claims Baker Spink. The 34,000-square-foot project is valued at $7.5 million.

The Flatiron is located on 1102 W. Summit Parkway. The 15,300-square-foot, three-story building with ground-floor retail space and eight residential units in the upper floors is inspired by the triangular-shaped Flatiron building in Manhattan, New York.

West of Jefferson, a five-story, 52,900-square-foot mixed-use project at 1128 W. Summit Parkway, is located west of the Flatiron building, across Jefferson Street. The ground floor has four commercial retail spaces, and the upper floors have eight studio apartments, 13 one-bedroom apartments, and 20 two-bedroom apartments.

“At Baker Construction, I see us continuing to grow,” says Baker. “Our future is amazingly bright and a big part of that is our succession planning.”

Written by Karina Elias for the Journal of Business